As a bus operator, Bus & Coach Buyer send me their publication each week. For the most part, it is a good read and covers a lot of interesting material. Occasionally i find it a little frustrating. For a publication aimed more at the independent sector than the big groups, certain articles can get carried away with larger group mentality. A case in point appeared in the 20th January 2017 issue, as part of the column by Roger French, former MD of Brighton & Hove. 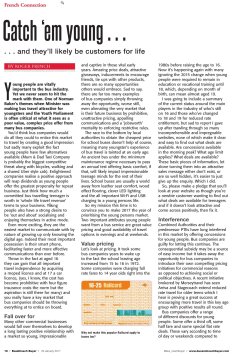 Roger is a much respected member of the bus industry, having achieved significant market growth and service development as MD in Brighton. These results speak volumes about how to develop services in a metropolitan, progressive part of the country. What i feel he lacks is an understanding of the independent side of the industry, particularly those of us running smaller fleets. We are classed, as is often the case in his articles as “subsidy junkies” (2nd col, 2nd page).

This is not the first time Mr French has been dismissive of services provided with subsidy to local authorities. Whilst i try to be a realist as to what the public purse can achieve, the fact remains that many of these services would not exist without some public spending. Much as i would like to have bus services wholly supported by the passengers we carry, it simply isn’t feasible in some parts of the country. We almost managed it in Bristol in 2010 with service 52, but ultimately we couldn’t win against the total market dominance of First’s season ticket offering in South Bristol.

I consider the £1.50 average subsidy per passenger journey of our Chew Valley area buses to be a pretty amazing achievement when a former contracted service to Bath was costing more like £8 per journey, much of which was being wasted in running an empty bus on Saturday afternoons.

In truth, the people who have the authority to make decisions to provide fare facilities for young people such as those described in the article probably number less than 100 nationwide. Most of them work for the large bus groups and many of them probably won’t see the article. Meanwhile those of us trying to keep bus services running that the likes of Brighton & Hove can’t be bothered with are being castigated by a respected industry figure for doing so. I could offer free travel of children or students on the services i run and it would generate negligible take-up. As is often the case, cost is not the dominant issue. My market is very different to those you understand and the assumption that we all have the profit margins to discount two thirds of the price of a ticket is nonsense.

Perhaps an article like this would be differently skewed if the authorspent a few days around the West Country. Around these parts, public perception of the service we provide is openly hostile, the only growing market is student travel to local universities and car culture is not only alive, but thriving. To overcome several generations of total car-centric behaviour is approaching impossibility.

Sadly the battles between two major group operators locally have seen any opportunity in the market sewn up and fiercely defended. Most council contracts in this area are operated by companies who don’t care about the quality of the service they provide and the contract price to the council reflects this. Much as i would like to attempt a more impressive operation, my family do quite like having a house to live in and food to eat. Many, many bus companies have failed by taking on more work than they can handle which doesn’t generate enough income to break even, let alone make a profit. I do not intend to become one of these victims.

So i apologise for being a subsidy junkie, Mr French. I apologise that my buses don’t have USB charging, wifi, horrible plasticy leather seats (which are not a positive, no matter how much you think they are) or run 24/7 on every route. What they are is warm*, comfortable and reliable, so perhaps you’ll think twice before deriding our part of the industry en masse next time.

* – in the winter, which it is now. And it’ll be much warmer in one of my buses than in the office typing this. Unlike many larger group operators we won’t need to have the heaters running in the summer, either. But hey, this attention to detail isn’t important, is it? Just make sure the kids can travel anywhere for 50p and everything will be marvellous.