This post was originally written last year, then shelved because i wasn’t happy with it. Whilst looking through subjects i had previously written about, i found a new enthusiasm to improve and present it, so here it is.

Ask the Audience
A common criticism aimed at bus operators in the aftermath of service changes is “Why weren’t we consulted?“. The truth is probably because there wouldn’t be an option on any consultation which gets overwhelming approval from a majority passengers.

The truth of the matter is that for commercial service decisions, the most important thing for the operator is to come up with something which works as a service whilst also covering the cost of operation. I think there is a fair chance that an honest public consultation on (as an example) the withdrawal of the X7 service between Clevedon and Weston in April would have gone something like this:

Perhaps North Somerset Council don’t help matters by laying on several “customer engagement events” following every revision to First’s network in the area. The problem is that these events usually take place in the week preceding the changes, by which time the long made decisions are completely set in stone and cannot be changed. This only serves to alienate anybody who takes the time to attend the event because they feel as though they are only being involved now that the decision has been made.

(At least the North Somerset approach of attempting to engage with passengers on some level is better than the tactic previously employed by a neighbouring authority.)

Whilst this situation is not a new one, the visibility of campaign groups has been greatly increased by social media and there is a considerable growing expectation that there will be formal consultations before any change. This is partly driven by socialist pressure groups who see damaging the reputation of the evil private sector as a key goal, rather than delivering appropriate funding to maintain service levels.

Spiky peaks
I don’t really see any winners in the current approach. Perhaps if more honesty and a bit more forward planning in some quarters were used, then passengers would understand what prompts the changes. Illustrating to passengers that they may be on a full bus at 8am, but the journeys at 11am, noon, 1pm and 2pm consistently run empty will help the understanding the economics that buses generally aren’t viable when running with a full load twice a day.

This isn’t solely a bus problem, as the new proposed GWR timetable from December will apparently see twice as many off-peak trains between Bristol and London, seemingly oblivious to the fact that their capacity problems are solely in the peaks. Adding 100 journeys a day when the requirement is for a dozen strategic ones at the busiest times seems a waste of staff hours when the slew of cancellations every weekend suggests they don’t have the staff to fritter away with empty weekday trains.

But i digress. Assuming that passengers are still happy to use a service after it has changed, how good are we at keeping them informed?

Tell me something…
A concerningly large number of major operators (Arriva Leicester, First York) are turning their backs on paper timetables, directing everyone to online services or even worse in the case of the First York story – charging people to print off their a

wful PDF timetables. Given how cheap leaflets can be to print and that publicity doesn’t need to be an extensive 32+ page booklet where a summary would do, i can’t help feeling this is a false economy.

And poor information isn’t limited to abandoning timetable leaflets. Locally, First’s current approach of putting an A4 poster up on buses with a list of services numbers which are changing from a certain date is poor. They provide passengers with the absolute bare minimum of information and don’t take in to account that there are 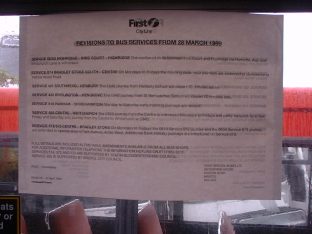 some service numbers used two or three times across the network.

In this respect, provisions for this are worse than they were 20 years ago when such notices gave considerably more information (not the best of pictures, but the only one i’ve been able to find).

As operators, we have to accept that no publicity is perfect, but that isn’t an excuse for not making the effort.